First let’s talk about MotoZ. It has 5.5” QHD display which is also an Amoled display. And it is powered by Snapdragon’s latest 820 processor with 4Gigs of Ram. You get two variants one is 32GB and other is 64GB variant. You even get a micro SD card expansion slot. Well in camera department it has 13MP with f/1.8 and Optical Image Stabilization and the placement of the finger print scanner is placed at the same place just like its predecessors. It has 2600mAh battery. The best part is it super slim just by 5.2mm. And it is even lighter which weighs 136g.

The Moto Z force sports same features but with minor upgrades like its camera is upgraded to 21MP and the display is shatterproof just like the Moto X Force. It is almost unbreakable. The battery is even boosted to 3500mAh. This phone is thinner at 7mm. 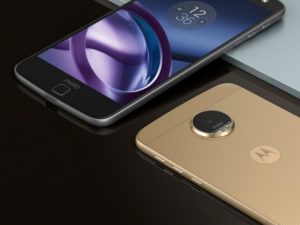 The best part of these phones is they are modular type. The company has built in partnership with JBL and they are selling a modular type speaker which can be connected to both phones. And they even provide a battery pack which boots battery upto 2220mAh. It even has a projector with open up wide to 70: with 480p resolutions. These mods are plug and play just like LG’s G5. You have to restart these phones to use these mods.

These two phones have USB type c and they have ditched the earphone jack just like Leeco Le 2 and Le Max 2. Pricing and available of the phone worldwide will be in September this year.