Bluetooth, the wireless standard that’s widely used to link fitness trackers to mobile phones and wireless keyboards to computers, will become more powerful in its next incarnation, the industry group developing the technology plans to announce Wednesday. 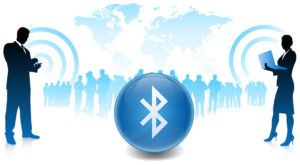 “Bluetooth 5 has a lot to offer,” said Mark Powell, executive director of the Bluetooth Special Interest Group, in a June newsletter. “It will double the range and quadruple the speed of low energy Bluetooth transmissions.” That should help your sleep monitor stay connected to your phone and let your smartwatch fetch a map faster.

In addition, the new Bluetooth version will be better for beacons that beam location data or advertisements to your phone as you wander around malls, airports or other public spaces, he said.

The Bluetooth 5 debut will take place at the Discover Blue press event in London on June 16, he said.

Bluetooth was named after Harald Blåtand, a 10th-century Danish king who was taken as a namesake for his successes unifying warring factions.