Four months ago Xiaomi launched Redmi Note 3. And the phone is still ranked at number one in all places. And in shopping sites the smartphone is always out of stock. Whenever it comes in stock. The stock is gone in few seconds. Xiaomi next budget smartphone was spotted on Geekbench. So let us discuss about Xiaomi Redmi 4and Mi Note 2 Pricing And Availability.

Well, thanks to the Xiaomi for upgrading the CPU which is actually used in the latest budget smartphone of Xiaomi, The Redmi 3S and Redmi 3S Prime. So you people might be knowing that Redmi 3s and Prime is having Snaprdragon 430.

Further we got some info on ram and storage department. The Redmi 4 has 3GB of RAM. And as usual it runs on Android’s latest Marshmallow with custom Skin MIUI 8. 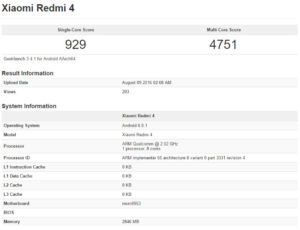 Well, the device also scored 929 in a single core test and 4751 on a multicore test. The scores were pretty expecting as well. It is not known if Xiaomi plans to launch this device in India.

While in the storage department it has 32GB of on board storage. The phone has dual 4G sim card slot. It has FHD display at top with the finger print scanner at the back. And the phone is expected to launch on August 25 with a price tag of CNY 699 approximate 7000INR.

It also has a super Amoled screen with the snapdragon 821 processor. And a 3600mAh battery with metal body, finger print scanner. at last this can be compared with the Mi 5 which was a flagship of Xiaomi this year.

Be updated here every day. Once it is officially launched we will let you know our review.

Note: feature image is not an image of the smartphones which were discussed in this article. it is used just for the attractiveness of the post.