Finally Nokia branded is coming most probably. As in the previous press meet Nokia CEO said we will launch 3-4 smartphones in the Q4 of 2016. It can be smartphones or tablets too. So today Nokia D1C with android 7.0 nougat surfaced on Geekbench

According to the leaks the smartphone will have Android latest Nougat 7.0 out of box. And in other leaks we found that the Nokia D1C will have 3GB of RAM with Snapdragon 430 which will be clocked at 1.4GHZ. And no other leaks have been yet. Have a look at the below image. Image shows the benchmarks of the Nokia D1C. 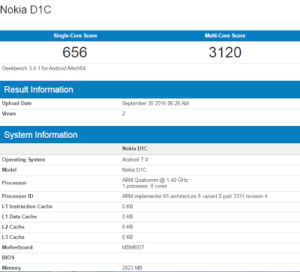 The chipset supports display resolution up to full-HD, so that’s what we may see on the phone as well depending on display size. Again, maximum upto 21MP camera modules are supported with 1080p 30FPS video recording. In the connectivity we expect it will have Bluetooth 4.1LE, Wi-Fi, GPS< A-GPS, etc. it will even support, dual 4G with dual band WI-FI.

At last Mike Wang president of the joint management team of Nokia China has confirmed total 3-4 smartphones, which can be both smartphones and tablets.