Telecom operator Bharti Airtel held a big event yesterday at New Delhi. The main aim of the event was to launch the Airtel Payments Bank. Finance minister Arun Jaitley was the chief guest at that event and he took the stage to boost the digital economy of the country. So again in this article, we will tell you Everything You Need To Know About The New Airtel Payment’s Bank.

It is aimed to cover all the 29 states of the country with 250,000 banking point. All the Airtel retail stores in the country will be upgraded with the immediate effect. If you remember, Airtel started its pilot program at Rajasthan. After getting some overwhelming response they planned to extend it pilot program in Andhra Pradesh and Telangana. In less than two weeks, Rajasthan saw over one lakh customers joining this digital initiative.

Have a look at this image and you will come to know its features. 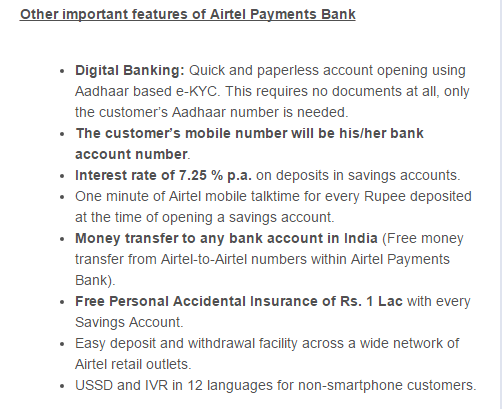 The Offerings from Airtel Payments

Just like any other traditional digital banks, Airtel Payments Bank will be offering a 7.25% of an interest rate on the saving account which is less than 4% comparing traditional banks. Rather than this Airtel will offer accidental insurance (personal) of 1Lakh to each customer with a savings account and free Talk-time equivalent to the deposited amount in the Airtel Payments Bank.

Initially, Airtel has said that the payment bank will be extended to Delhi and nearby states like Uttar Pradesh and Haryana. It will later lead to a nationwide roll out in coming months. Airtel Payments Bank commits an initial investment of Rs 3000 crores to develop a pan India banking network and digital payments ecosystem.

Airtel Payment’s bank has already been integrated into the My Airtel app which is available on both iOS and Android. Using My Airtel app customer would get easy access to Master Card powered online card. And it can be used to pay to the online merchants accepting masterCards. The best part is you will not get charged for any processing fees here.