A Single Tweet made Samsung Loss of 550Million$(3600crINR) wanna know how it happened. read the whole article. we will let you know.

If it’s good, it can be proved evil too and has the potential to ruin the whole lot; from trolling to cheating to making a company lose more than £400million; yes, that’s true!! 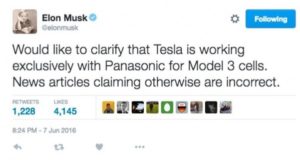 Now we got rumors that TESLA had its partnership with Samsung which is manufacturer of displays and batteries. So Samsung had a deal with TESLA that it will manufacture battery for MODEL 3 car.

But unfortunately after the ELON MUSK tweet(the above pic) has made Samsung loss almost 3600crores INR. The Samsung SDI dropped by 8% in stocks and result is loss of 3600Crores.

In the meantime Panasonic gained 8% profits in stocks and they were in profits of around 550Millions$.Bloomberg has discovered that Samsung may, even now, be working with Musk’s company on energy products and probably another tweet could sort the losses!!