Now, what if I say that there is something more than that. The smartphone that has End To End encryption of your communication in it. And one more thing I would request you people to have a look at its spec sheet and I guarantee you will be totally amazed.

Turing Robotics Industries (TRI) has unveiled its latest smartphone. The name of the smartphone is Turing Cadenza. This smartphone is not just a smartphone. It has some “Voice On” technology through which you can turn on/off using voice commands. It is even said that this technology can even be used as Biometric Authentication.

And it just doesn’t end here it has 1TB of internal Storage and this can further be extended by using an micro SD card expansion up to 500GB. You might have already drooled with the specs we have told you till now. But it still doesn’t end here. 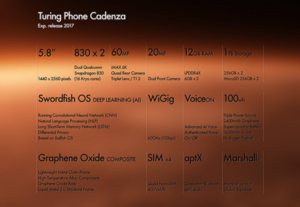 Turing Cadenza has stunning 60MP rear camera with IMAX 6K recording feature. And it is paired with dual 20MP as front facing camera. User can use up to 4 Nano sim cards on this smartphones.

Turing Cadenza uses its own OS named as Swordfish OS which has deep learning of AI (Artificial Intelligence). And at last it has 100Wh battery with Graphene and Hydrogen fuel cells.

However, these feature are just unbelievable. But still if this smartphone is scheduled to launch in 2017. If this smartphone launches then, the main question over here is how much the price will be of Turing Cadenza.

Do share with your friends and let them know about this beast.