Moto Z feature a huge 5.5” QHD display with a packed resolution of 2560×1440. Under the hood it is powered by Snapdragon’s latest Snapdragon 820 processer, which is an Octa-Core processor. Snapdragon 820 is clocked at 2.2GHZ with Adreno 530GPU. Moto Z has 4GB of RAM with 64GB internal.

You even get the micro sd card expansion which supports memory cards up to 2TB. Phone will come with Android Marshmallow out of the box. Moto Z has dual 4G sim slots. It has 2600mAh battery which supports quick charge using USB Type C. USB type C is also supported to headphones.

In the camera department it has 13MP with dual tone LED flash and has OIS (Optical Image Stabilisation). Camera even features laser autofocus. It also 5MP front facing selfie shooter with f/2.2 aperture, wide angle lens. Smartphone even features a finger print sensor. So you can unlock the smartphone using your finger. 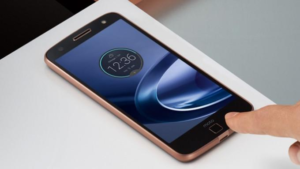 Moto X Play has 5.5” FHD Amoled display with a packed resolution of 1920×1080. Under the hood it is powered by Snapdragon 625 which is 14nm chipset. Snapdragon 625 is an Octa-Core chipset. In the graphics department it has Adreno 506 GPU. Phone comes with Android Marshmallow out of the box.

Moto Z Play comes with 3GB of RAM and 32GB internal support. It also has micro sd card expansion slot. if we take a look towards camera department, we have 16MP rear camera which can record video in FHD resolution. It even has dual tone LED flash. You can even capture selfie with 5MP front facing selfie shooter.

Moto Z Play has all sorts of connectivity options like Wi-Fi, Bluetooth 4.0, and 3.5mm audio jack. The Moto Z Play also gets water repellent Nano-coating, three mics, and a front-facing speaker. It has packed battery of 3510mAh.

The company has built in partnership with JBL and they are selling a modular type speaker which can be connected to both phones. And they even provide a battery pack which boots battery upto 2220mAh. It even has a projector with open up wide to 70: with 480p resolutions. These mods are plug and play just like LG’s G5. You have to restart these phones to use these mods. have a look at the video below.