Microsoft yesterday launched a keyboard on iOS platform which is actually pretty amazing with the feature Microsoft provided. And the features are so interesting that all android user will be jealous of iOS users.

Before launching at iOS platform that keyboard was earlier seen on Windows platform. And there were so many features. Like autocorrect, etc.

Now let’s speak about iOS platform. This keyboard is so good at its features. It has autocorrect feature which automatically corrects your words you type. And it has another feature too. It can autocomplete sentence too. And the best part is it will sync your contacts and will autocorrect the names when you type.

And now I am going to tell you the secret feature of this keyboard. It as one handed feature in which you can the anything with just one hand. After enabling that feature the keyboard moves aside and that’s it you can type with one hand. Like the image below. You will get a better view. And by this feature you can type very fast. 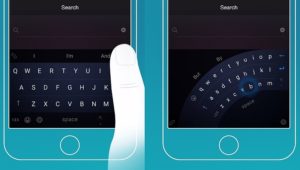 Lol, I forgot to tell you the name of keyboard. The name of the keyboard is Wordflow. You can download it from here.