Xiaomi’s Previous Mi5 was not that impressive as at the same price we get one plus three with some better configurations, which were comparatively better than Mi5. So now Xiaomi plans to release the advance version of Mi5s which will be overclocked (most probably). So lets start about Mi5S With 3D Touch Spotted on AnTuTu.

The benchmarks were spotted for the Mi5s in the AnTuTu, as per the post on Weibo the Mi5S will have an advance processor which is Snapdragon 821 with a FHD screen up on it. And the best part it comes with marshmallow preloaded. As Xiaomi updates it’s MIUI which is custom skin, but they don’t upgrade the android version.

This was leaked at AndroidPure. And further Mi5S has 5.15” screen which I said before is FHD display. And there is 3D touch feature on this smartphone. Besides the 3D touch Mi5S has 6GB of LPDDR4 and 256GB of internal storage.

Now let’s move to battery and charging part. Mi5S has 3490mAh battery which can be charged by type c cable. And yes it supports quick charge.

As I said before this will be overclocked. So the processor is clocked at 2.4GHz with Adreno GPU 530. So no doubt in graphics performance.

The New Mi5S has dual 16MP cameras as rear camera and it has 8MP rear facing camera. And the best part it has OIS in the rear camera.

So these were the specs of the new Mi5S. Have a look at the screenshot below of Phone listed in AnTuTu benchmark. 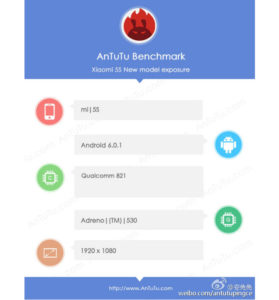