Now, almost every mi device that is compatible with MIUI-8 is upgraded to MIUI-8. I have even written article about MIUI-9 based on android nougat. Leaked Imaged of Xiaomi MIUI-9 in Works is at last.

According to reports we got. Xiaomi has started developing the MIUI 9. But as Xiaomi does always, it doesn’t give latest android updates to its smartphones. For example Xiaomi’s flagship Mi4 has MIUI 8 but based on Android Kitkat.

And we got one more on the latest smartphone of Xiaomi which is Redmi Note 3 it has MIUI 8 based on the lollipop and it got MIUI8 on based on Lollipop itself. And soon Redmi note 3 users will get Marshmallow update. As the beta is available to install. But yes in the marshmallow update, there are no new update or new features. This is just a software upgrade. The Only that will change is android version.

As of MIUI-9 we expect to a bit sooner. And the reason behind it is Google set to create a ranking system of Android device manufacturers based on the frequency with which they provide Android updates, expect changes with Xiaomi.

So we can expect the MIUI-9 based on nougat soon on MI devices. Here is the screenshot that was leaked. Have a look. 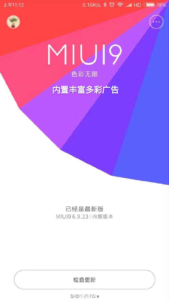 This completely shows that MIUI-9 is in working. And Xiaomi developers are working hard to get this MIUI-9 done as soon as possible. In feature part, we didn’t get any info as of now. But once Xiaomi made a poll on MI community whether users need multi windows in it. So now we can expect a multi-window feature on the next MIUI update.

As of now, MIUI-8 has tonnes of new features like scrolling screenshot, quick ball, multi-function calculator, etc. and there was a boost in performance and battery department. Multi-tasking was at its best in MIUI-8. List of devices to get MIUI-9 is as follows.