It comes with a massive 5.5”FHD display with a packed resolution of 1920X1080pixels. It has a pixel density of ~401 PPI. This smartphone comes with android marshmallow out of the box with Emotion UI which is popularly known as EUI 4.1 on top of it.

Just like Samsung smartphones Huawei has its own chipset on Honor 6X. Under the hood, the smartphone is powered by Huawei HiSilicon Kirin 655 Soc which is clocked at 2.1GHZ. It is an Octa-Core processor. The graphics department is handled by Mali T830-MP2 GPU. 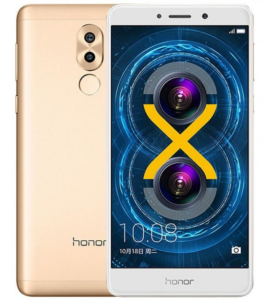 Now, let’s have a look at the main part of this smartphone. So let’s talk about the camera. Huawei Honor 6X has a dual camera setup. It has 12MP with a 6P lens and a PDAF (Phase Detection Autofocus) and the second camera is 2MP for the depth of field. The rear camera can record up to 1080P. It has a single LED flash. On the front, you get the 8MP as a selfie shooter.

Honor 6X has all sorts of connectivity options like Wi-Fi, Bluetooth, GPS, and A-GPS. Honor 6X also has dual 4G sim slots with Volte support. It also has a fingerprint sensor at the back for security purposes. and  has a hybrid sim slot just like the Redmi Note 3. Honor 6X comes with 3340mAh battery, which supports fast charging.

Honor 6X is available in 5 colors gold, silver, gray, blue, and rose gold. While pre-orders have been started in china and there is no word for the other market to launch.