Past few weeks there so many leaks of the latest by Apple which is iPhone 7. In fact we got rumours that apple is going to launch three version of iPhone 7. We got info that iPhone is going to have dual camera’s and some bulky cameras. Let me clear you everything about iPhone 7.

According to @eveleaks a twitter account. This user actually shows so many leaked images of top end smartphones. The user stated the date that iPhone 7 will launch in the week of September 12. Actually this leak was buzzed by so many people.

As we have seen, the next iPhone devices have been revealed through some leaks that show the existence of three models for this year, although other sources claim that there are only two. And even this was claimed by the twitter user @eveleaks.

In one of the latest video it was showed that there were two variants of iPhone 7, which iPhone 7 and its plus version. In another leak by @eveleaks this idea reinforced. The internal name or codes of these two devices are “SONORA” and “DAS “PALLOS”, respectively. 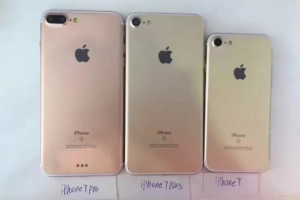 Today once again a new pic was found on the Chinese social network site weibo showing three variant of the iPhone 7 again. The devices in the image are supposed prototypes developed for companies who manufacture accessories for iPhone, allowing these third-party products are available for the latest releases immediately after being offered for sale.

Few other photos revealed in the Chinese social networking site shows that the pro variant has dual camera set up. So here is the interesting we would like to share it to you. These images shows the apple logo at the back. This shows they are at the final stage of the development of the new iPhone 7.

With the leaked images on the Chinese social network the tech giant Apple might announce two variants or three variants which is net yet confirmed. The most reliable rumors’ indicates two variants. But don’t forget one thing the leaks are by the user @eveleaks.

As we don’t know the official announcement of the next iPhone. It can be after September 12 of this year. There are still other rumors that iPhone 7 is going to release in 2017 while iPhone 6SE might release in the month of September.