Usually, laptop is made as you can work anywhere anytime. And the main reason behind it is they light and are portable. But none of the things are connected to Acer Predator 21x.

As usual, all laptops have screen size on average of 13”-15” inch. But Acer Predator 21X has 21” screen, which is almost 53.3centimetres. And yes, this doesn’t end here. With the huge screen, it has a curved display. And I must say Acer Predator 21X is world’s first gaming laptop with the curved screen technology.

Acer Predator 21x weighs almost 8KG’s which is 4times weightier than the normal laptop or we can gaming laptops. People say gaming laptops are heavy coz they have probably highest configuration to play all High-End games. But this monster it weighed 8KGs.

As it is a gaming laptop, it should have good GPU’s and produce best graphics. So Acer kept Dual-Nvidia GeForce GTX 1080 GPU’s with Gsync technology which shows unmatched graphics performance. Acer’s Predator 21X has full sized RGB LED Mechanical keyboard with CherryMX keys on top.

And now, Acer Predator 21X offers 64GB of DDR4 RAM with 4TB of SSD storage with RAID-O support. This laptop has a Soundpound2+ sound system with 4speakers and 2Sub Woofers. It also carries 5 cooling fans and a number pad that flips and converts to Touchpad (image below). It includes Dolby Atmos in sound quality. 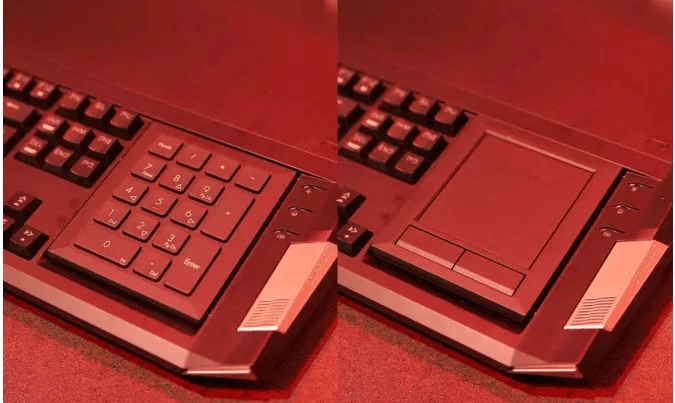 Now, what this technology does is it tracks a human eye with the trackers or sensors this laptop has, and it identifies human interactions like aiming, hiding somewhere or finding enemies, etc. This technology also provides an infinite view in while navigating through paths or roads in a game.

At last, these were the specification of the Acer Predator 21X – Monster of Gaming Laptops. Kindly provide your views on this laptop in the comment box. Have a look at this video by Acer.

For all the latest reports of Consumer Electronic Show (CES) 2017, you can navigate to our CES 2017 page.